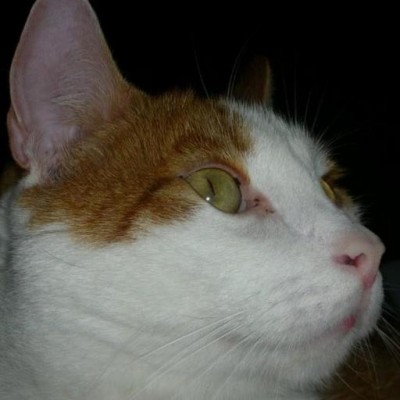 A triangle is a polygon with 3 points. The order of the points is important, as it indicates the winding order, clockwise or counter clockwise.

Remember, this cross product is actually the z of the normal of the triangle if it was a 3d space we were working in. So the sign shows whether that normal points into or out of the plane the triangle is in.

The area of the triangle is equal to half the absolute value of the cross product of the vectors originating from one of the points, thus

We will shortly show why this is so.

Lets look at a few examples. We have the triangle A, B, C. To make A from a linear combination of the points of the triangle, we can simply write

For a point halfway between A and B, we can write

Now let’s take a point which lies in the middle of the triangle. Since this point can be calculated by adding all the points and dividing the sum by 3, we can write this point as

This point is called the centroid or barycenter of the triangle. Note that the sum of the coefficients is 1.

If we move the point from the center towards A, the coefficient for A will increase, while the other two coefficients, for B and C, will decrease.

Likewise if we move the center point towards the middle of A and B. The coefficients for A and B will increase while the coefficient for C will decrease.

We see that the barycentric coordinates of a point can tell us the relative distance towards each point in the triangle. They can also tell us whether a point lies within or outside the triangle as we will use shortly.

The texture coordinates are interpolated across the triangle in the same way. In a game this can be used for more than just visual properties. If our game uses triangles to define the terrain, vertices can store for example speed factors to slow down units on certain places like sand or swamp ground. By calculating the speed factor at the unit’s position relative to the triangles points using barycentric coordinates, we can get smooth transitions between terrain types.

If we know that the barycentric coordinates are all within 0 and 1, and their sum is not greater than 1, we can say that the point is within the triangle.

How do we test this? Fairly simple. We take the vector AB and the vector AC and calculate the cross product. Then we do the same with AB and AP. Remember that for the cross product, the order in which we take vectors will decide the sign of the result. If we take AB x AC, we know which sign gives a point on the correct side of AB. If AB x AP matches that sign, P lies on the same side as the triangle. If we repeat this for the other two edges, we can determine whether P lies inside the triangle.

Of course if we know the winding order of the triangle, we can simplify this to only three cross products, as we know which sign to check for.

A common, and for some dreaded, theme concerning triangles is the properties of a right-angled triangle. Given an angle and a side, calculate the remaining sides for example. However, we don’t need to learn or remember anything we haven’t covered yet.

Let’s start by laying the triangle in our favorite configuration. First we rotate the triangle towards the x axis. 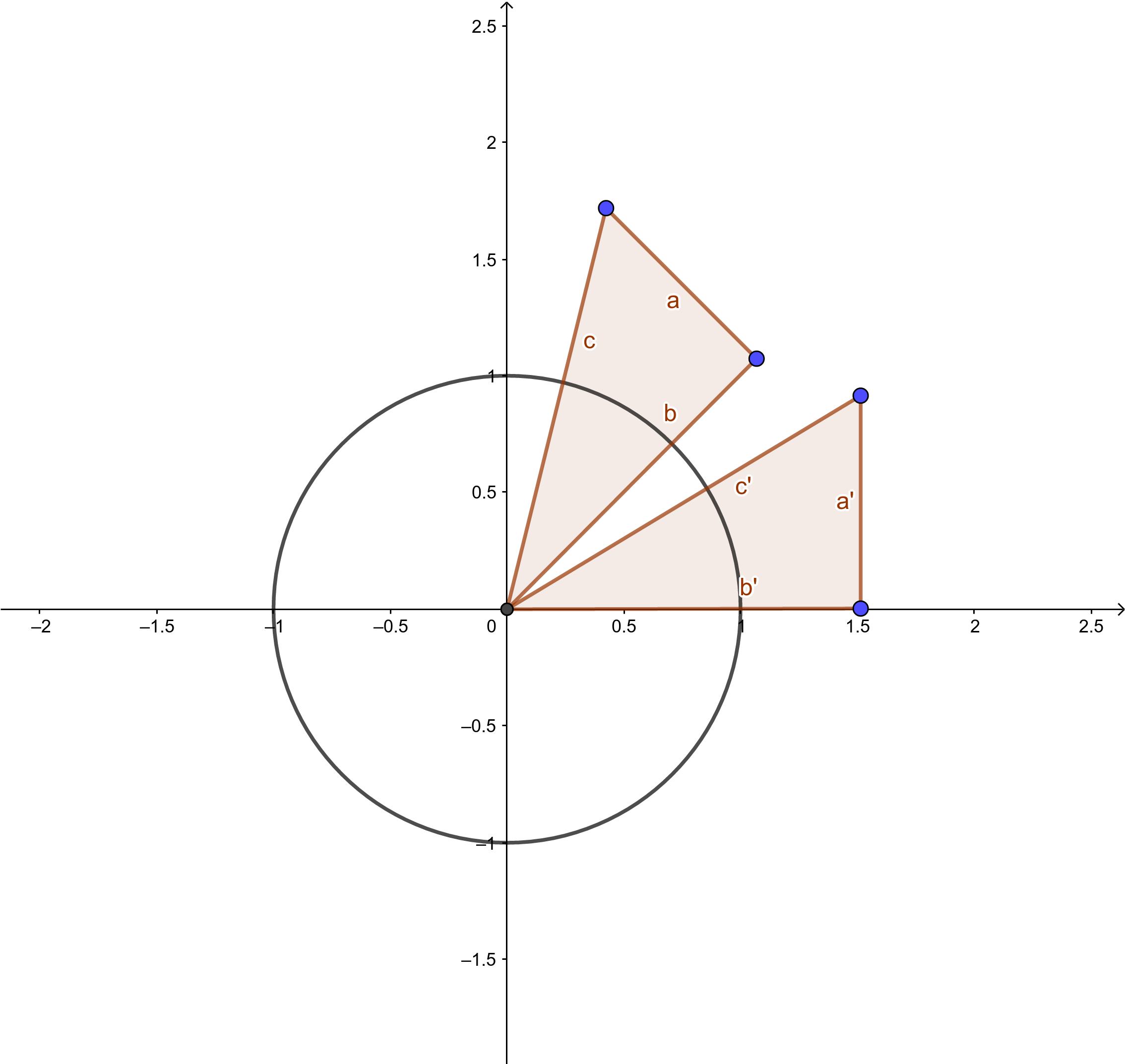 Then we scale it so that the length of c is 1.

Also since we know that \(cos(\alpha)^2+sin(\alpha)^2 =1\), since the dot product of the vector with itself gives us its squared length, which is equal to 1, we can write

by multiplying each side with \(c^2\). If we regroup the terms we get

Unlike learning rules, this is something you can reconstruct any time you need it.

A triangle where two sides are equal and the angle between these sides is 90 degrees might sound a bit too specialized, however it is quite common in games where objects are placed on a grid.

If we scale this triangle so that the equal sides are of length 1, the remaining side has a length of \(\sqrt{2}\).

This means that the side of the original unscaled triangle is \(s\sqrt{2}\), with \(s\) the length of one of the equal sides.

Moreover, the distance from the point between the equal edges to the longest side is \(\frac{\sqrt{2}}{2}\).

This knowledge is useful in for example pathfinding when allowing traveling the diagonals. These diagonals are \(\sqrt{2}\) units compared to crossing both a horizontal and vertical side, which is 2 units.

If the triangle is not right-angled, it can be split in two right-angled triangles which you can solve separately. You can use vector projection to find a point on an edge opposite to the third point and create a new edge perpendicular to the edge.

Deriving the area of a triangle formula

If we take the triangle, and double it across an edge, we get a parallelogram. 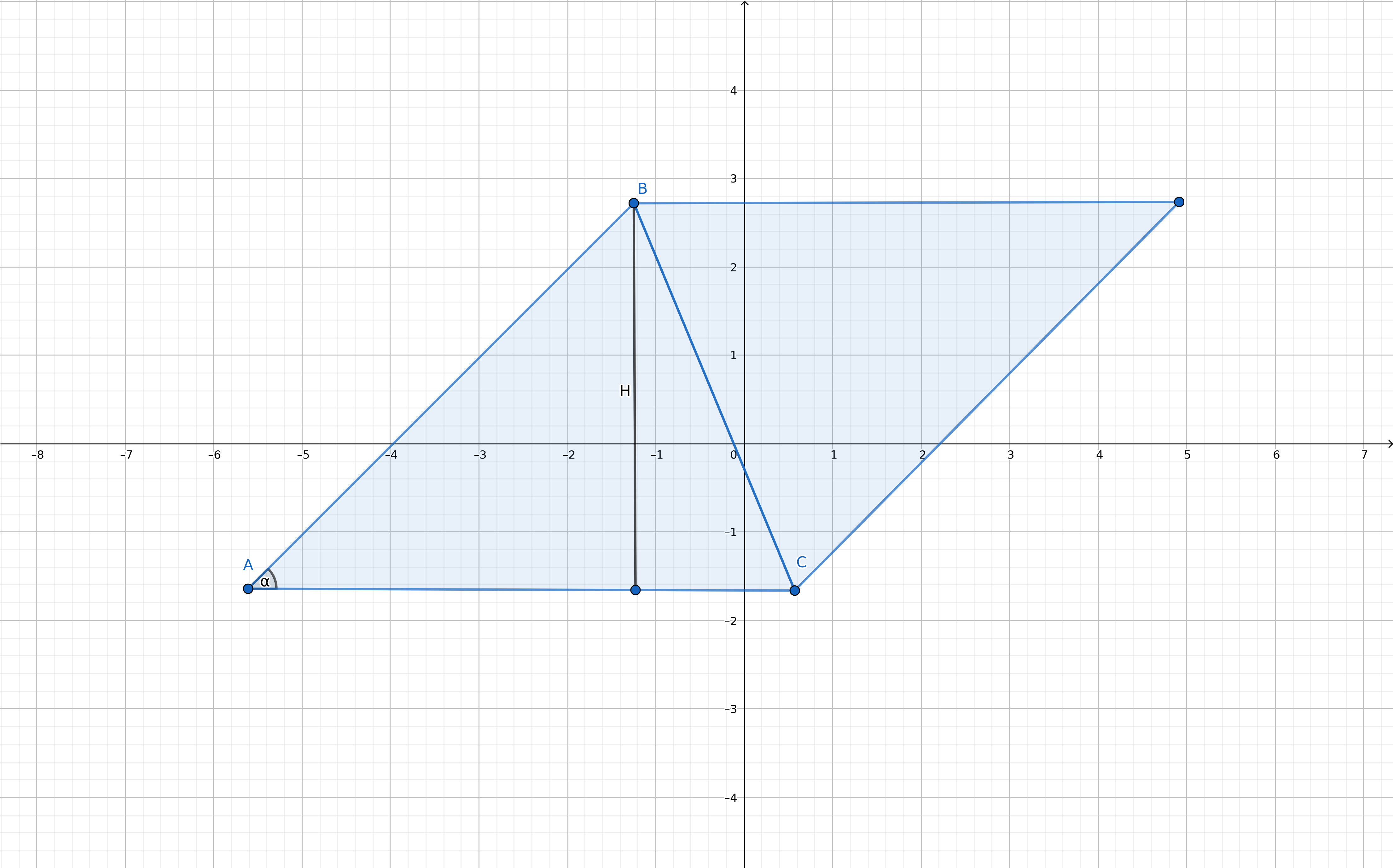 From the parallelogram, we can cut of a right angled triangle in order to construct a rectangle. 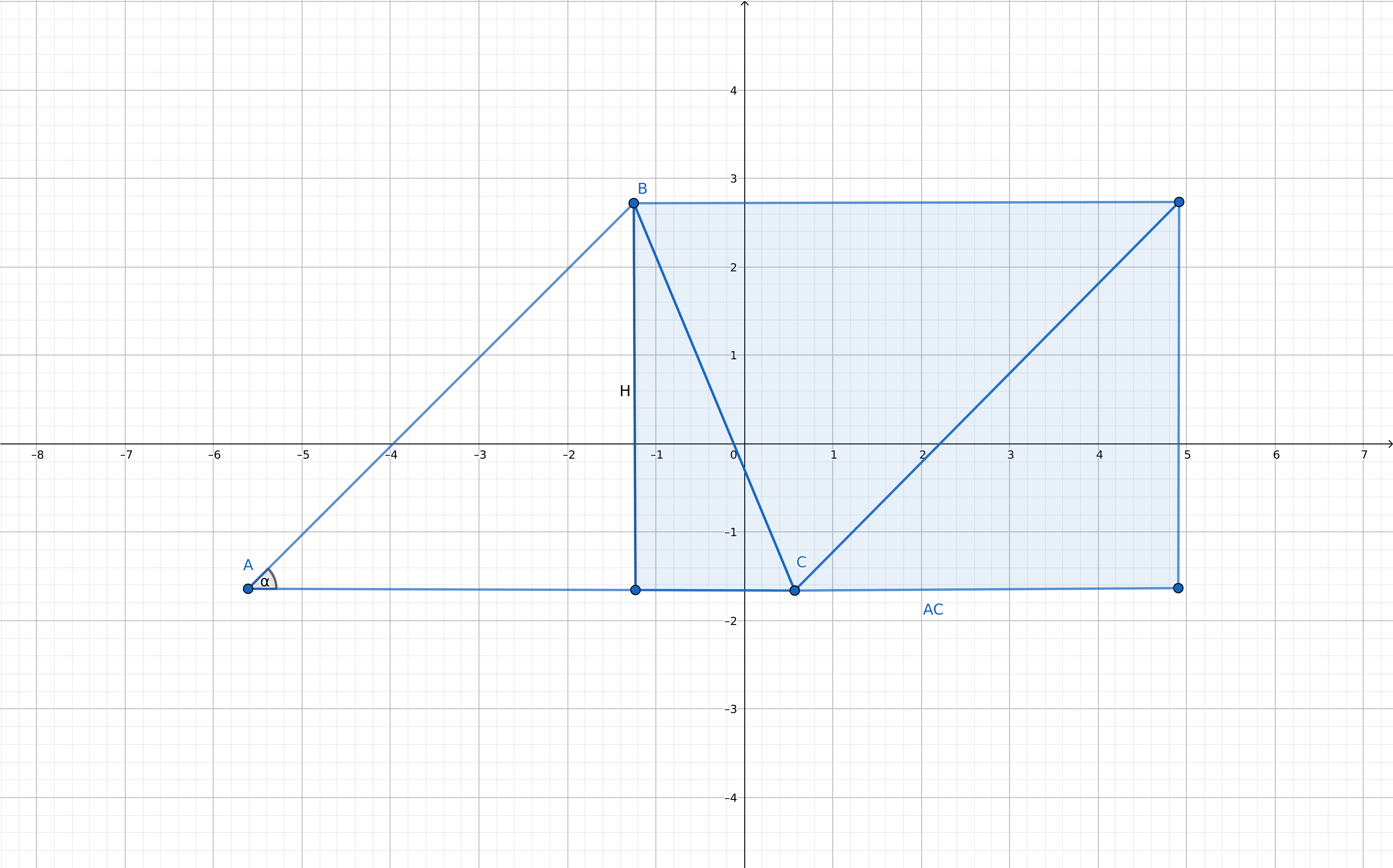 Since the area of the rectangle is width times height, thus \(\left\lVert\vec{AC}\right\lVert*H\), we can calculate the area if we have the height or H of the parallelogram. We know, since we have a right angled triangle, that

So the area is equal to

Remember that the cross product of two vectors is equal to the product of the lengths of the vectors multiplied by the sine of the angle between the vectors, thus

Since the triangle is only half the parallelogram, we need to divide by two

And since a cross product’s sign depends on the order of the vectors, it might be negative depending on the triangle’s winding order, thus we need to take the absolute value